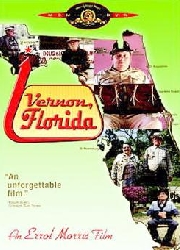 Documentary produced and directed by Errol Morris profiling various eccentric residents living within the town of Vernon, Florida. Originally titled Nub City, this follow-up to Gates of Heaven was initially focused on residents of the Southern town who cut off their own limbs as a way to collect insurance money. After Morris’s life was threatened by the subjects of the film, he re-worked Nub City into Vernon, Florida.