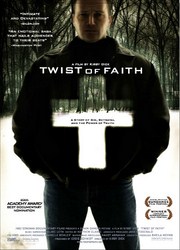 Twist of Faith follows the intimate psychological journey of Tony Comes, a firefighter from Toledo, Ohio who claims he survived years of sexual abuse at the hands of a local Catholic priest and teacher, Dennis Gray (whom we see throughout the film as he speaks to authorities at a deposition for this case).

When we first meet Tony, he seems to have it all: great job, pretty wife named Wendy, two adorable kids, and a beautiful new house. But Tony is just beginning to come to grips with a past he’s buried for twenty years, and is no longer able to contain. The constant barrage of news related to sexual abuse, coupled with a disturbing discovery in his personal life, causes Tony to confront his demons.

As Tony describes his past, a disturbing and haunting story emerges. Tony grew up in a large Catholic family, and attended parochial schools in Toledo, where he struck up a friendship with a charismatic religion teacher and priest named Dennis Gray. Normally, a boy’s strong relationship with a priest meant the family could be assured that someone was around to guide him. But Tony claims he was in fact being sexually abused by Gray in a lakeside cabin in Michigan. According to Tony and several other men who appear on camera, Gray would invite boys up to the cabin on weekends, where they could play pool, swim, go skinny-dipping, and drink alcohol. The priest had his own bedroom, but would rotate sleeping assignments and select certain boys to share his room at various times. Soon, Tony wound up sleeping in the man’s bedroom – and woke up to find he was being sexually abused. According to Tony, Gray cautioned the boys that «whatever happens at the cottage, stays at the cottage,» threatening severe consequences if they were ever to utter a word to anyone. So Tony kept silent, not even telling his parents. But the vivid memories of abuse remained, always surfacing at inopportune moments to torment him.

Years passed, and Tony married Wendy (who converted to Catholicism), to whom he eventually confided. They now have two children, 9-year-old Samantha and 4-year-old Mitchel, and recently moved into a new home on a quiet suburban street. All seems normal, until Tony hears about other stories of abuse in places like Boston, and – more personal and disturbing – learns that Gray lives on the same street, only a few houses away. The news sends Tony first into shock, then resolve. He decides to report his abuse to the person he has been taught to trust the most: the Bishop of his diocese. But after learning the Bishop has denied that others made the same allegations against Gray (Tony knows they did), he ends up filing a lawsuit against the diocese – first as a John Doe, then later putting his own name on the suit and going public. He even sits his daughter down to tell her about his past, warning her to avoid Gray if she runs into him in the neighborhood.

Soon, Tony is a public figure, with reporters interviewing him and national newscasts reporting his allegations against Gray. Other men have also pointed fingers at Gray – meeting with two of them, Tony feels a camaraderie that is somewhat cathartic. Yet his case against the diocese drags on; seemingly reluctant to settle for a payoff in exchange for silence, Tony insists that the church admit to the abuse in public and give him an apology. It doesn’t seem likely, however, and the stress starts taking its toll on Tony’s health (he loses 27 pounds) and his marriage. When Samantha makes her first communion at the church, Tony reluctantly attends, though he says he’ll probably never go back. Speaking with his mother about her continued donations to the church, Tony accuses her of «paying the authorities that are fighting me.» His life spiraling out of control, Tony and Wendy meet with attorneys to discuss filing for divorce. Alone in his den, Tony wistfully watches home videos of family vacations in happier times, wishing he could exorcise his demons once and for all. After more footage of Gray at his deposition, we learn that in 2004, Tony and 21 other survivors entered into settlement discussions with the Toledo Diocese. The diocese offered Tony $55,000, which he reluctantly accepted. Several weeks later, it was revealed the diocese had a stock portfolio worth $117,000,000. All lawsuits against Dennis Gray were settled and he has publicly denied the allegations against him. He now lives ten miles from Tony and Wendy, who are still together.