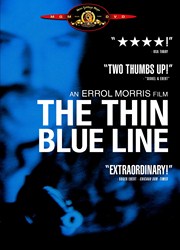 «The Thin Blue Line» is the fascinating, controversial true story of the arrest and conviction of Randall Adams for the murder of a Dallas policeman in 1976. Billed as «the first movie mystery to actually solve a murder,» the film is credited with overturning the conviction of Randall Dale Adams for the murder of Dallas police officer Robert Wood, a crime for which Adams was sentenced to death. With its use of expressionistic reenactments, interview material and music by Philip Glass, it pioneered a new kind of non-fiction filmmaking. Its style has been copied in countless reality-based television programs and feature films.

Terrence Rafferty in The New Yorker has called it «a powerful and thrillingly strange movie. Morris seems to want to bring us to the point at which our apprehension of the real world reaches a pitch of paranoia — to induce in us the state of mind of a detective whose scrutiny of the evidence has begun to take on the feverish clarity of hallucination.»

«The Thin Blue Line» was voted the best film of 1988 in a Washington Post survey of 250 film critics. Premiere magazine, in a survey of films of the 1980s, described it as one of the most important and influential movies of the decade.