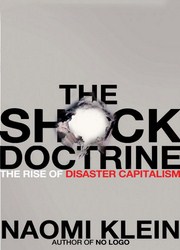 In her best-selling book, “The Shock Doctrine”, Naomi Klein examines the rise of disaster capitalism, a doctrine which enables governments and global companies to exploit the economies of countries affected by wars, terrorist attacks or natural catastrophes. Tracing the origins of this theory back to neo-liberal economist Milton Friedman, the film proceeds to follow various applications of these ideas in contemporary history: the economic models of Pinochet’s Chile, Jelzin’s Russia and Thatcher’s Great Britain all bear the unmistakable mark of radical neoliberalism; but political catastrophes such as the Tiananmen Square Massacre in Beijing or the invasion of Afghanistan and Iraq are also the result of aggressive laissez-faire capitalism. This film focuses on the dark side of Friedman’s theory which, the film postulates, can only be implemented by a system of violence and oppression.
Naomi Klein is the driving force of Winterbottom’s film. In it she puts forward the arguments set out in her book; she also presents extensive archive material and interviews chief witnesses such as Janine Huard, a victim of Ewen Cameron’s experiments on humans in the 1950s which gave rise to the CIA’s present day torture practice. In the current climate of global economic crisis it is important to make a stand against Friedman’s doctrine, of which US Defense Secretary Donald Rumsfeld once said: “Milton Friedman is the embodiment of the truth that ‘ideas have consequences’.” The global extent of these consequences makes it all the more important to make Naomi Klein’s voice heard.