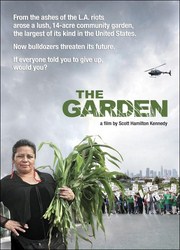 The 14 acre community garden in South Central Los Angeles was the largest of it’s kind in the United States. It was started as a form of healing after the devastating L.A. riots in 1992. Since that time, the South Central Farmers have created a miracle in one of the country’s most blighted neighborhoods. Growing their own food. Feeding their families. Creating a community. But now bulldozers threaten their oasis. The Garden is an unflinching look at the struggle between these urban farmers and the City of Los Angeles and a powerful developer who want to evict them and build warehouses.