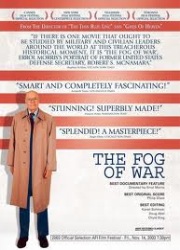 The Fog of War: Eleven Lessons from the Life of Robert S. McNamara

Documentary about Robert McNamara, Secretary of Defense in the Kennedy and Johnson Administrations, who subsequently became president of the World Bank. «Fog of War» combines an interview with McNamara discussing some of the tragedies and glories of the 20th Century, archival footage, documents, and an original score by Philip Glass.