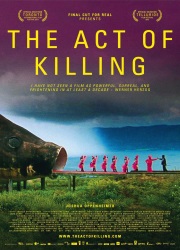 A documentary that challenges former Indonesian death squad leaders to reenact their real-life mass-killings in whichever cinematic genres they wish, including classic Hollywood crime scenarios and lavish musical numbers. Anwar Congo and his friends have been dancing their way through musical numbers, twisting arms in film noir gangster scenes, and galloping across prairies as yodelling cowboys. Their foray into filmmaking is being celebrated in the media and debated on television, even though Anwar Congo and his friends are mass murderers.

Medan, Indonesia. When the government of Indonesia was overthrown by the military in 1965, Anwar and his friends were promoted from small-time gangsters who sold movie theatre tickets on the black market to death squad leaders. They helped the army kill more than one million alleged communists, ethnic Chinese, and intellectuals in less than a year. As the executioner for the most notorious death squad in his city, Anwar himself killed hundreds of people with his own hands.

Today, Anwar is revered as a founding father of a right-wing paramilitary organization that grew out of the death squads. The organization is so powerful that its leaders include government ministers, and they are happy to boast about everything from corruption and election rigging to acts of genocide.

The Act of Killing is about killers who have won, and the sort of society they have built. Unlike ageing Nazis or Rwandan génocidaires, Anwar and his friends have not been forced by history to admit they participated in crimes against humanity. Instead, they have written their own triumphant history, becoming role models for millions of young paramilitaries. The Act of Killing is a journey into the memories and imaginations of the perpetrators, offering insight into the minds of mass killers. And The Act of Killing is a nightmarish vision of a frighteningly banal culture of impunity in which killers can joke about crimes against humanity on television chat shows, and celebrate moral disaster with the ease and grace of a soft shoe dance number.

A Love of Cinema. In their youth, Anwar and his friends spent their lives at the movies, for they were “movie theatre gangsters”: they controlled a black market in tickets, while using the cinema as a base of operations for more serious crimes. In 1965, the army recruited them to form death squads because they had a proven capacity for violence, and they hated the communists for boycotting American films – the most popular (and profitable) in the cinemas. Anwar and his friends were devoted fans of James Dean, John Wayne, and Victor Mature. They explicitly fashioned themselves and their methods of murder after their Hollywood idols. And coming out of the midnight show, they felt “just like gangsters who stepped off the screen”. In this heady mood, they strolled across the boulevard to their office and killed their nightly quota of prisoners. Borrowing his technique from a mafia movie, Anwar preferred to strangle his victims with wire.

In The Act of Killing, Anwar and his friends agree to tell us the story of the killings. But their idea of being in a movie is not to provide testimony for a documentary: they want to star in the kind of films they most love from their days scalping tickets at the cinemas. We seize this opportunity to expose how a regime that was founded on crimes against humanity, yet has never been held accountable, would project itself into history.

And so we challenge Anwar and his friends to develop fiction scenes about their experience of the killings, adapted to their favorite film genres – gangster, western, musical. They write the scripts. They play themselves. And they play their victims.

Their fiction filmmaking process provides the film’s dramatic arc, and their film sets become safe spaces to challenge them about what they did. Some of Anwar’s friends realize that the killings were wrong. Others worry about the consequence of the story on their public image. Younger members of the paramilitary movement argue that they should boast about the horror of the massacres, because their terrifying and threatening force is the basis of their power today. As opinions diverge, the atmosphere on set grows tense. The edifice of genocide as a “patriotic struggle”, with Anwar and his friends as its heroes, begins to sway and crack.

Most dramatically, the filmmaking process catalyzes an unexpected emotional journey for Anwar, from arrogance to regret as he confronts, for the first time in his life, the full implications of what he’s done. As Anwar’s fragile conscience is threatened by the pressure to remain a hero, The Act of Killing presents a gripping conflict between moral imagination and moral catastrophe.