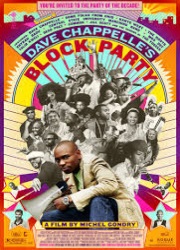 Dave Chappelle’s Block Party spotlights comedy superstar Dave Chappelle as he presents a Brooklyn neighborhood with its very own once-in-a-lifetime free block party. The unprecedented combination of comedy and music was shot on location. In addition to Mr. Chappelle performing all-new material, the stellar roster of artists includes Kanye West, Mos Def, Talib Kweli, Common, Dead Prez, Erykah Badu, Jill Scott, the Roots, Cody ChesnuTT, Big Daddy Kane, and – reunited for their first performance in over seven years – the Fugees. Academy Award-winning filmmaker Michel Gondry and his Eternal Sunshine of the Spotless Mind cinematographer Ellen Kuras capture all of the exclusive performances and crowd excitement on an unforgettable Saturday afternoon and night, as well as (earlier in the week) private rehearsals footage and Mr. Chappelle in the small Ohio town he calls home. In Ohio, Mr. Chappelle wandered through town handing out golden tickets to invite several dozen citizens to join the party, providing transportation and lodging for their first-time-ever visit to Brooklyn. Ohio’s Central State University marching band made the trip and helped kick off the festivities at the intersection of Quincy and Downing Streets. As a diverse crowd comes together, Mr. Chappelle’s freestyle wit guides them (and us) through a day-long, life-affirming celebration of music and comedy, history and community. The lineup of performers is distinguished not only by the caliber of their music but also by the strength and power that their art draws from keeping their creativity pure.